Cycle Safety: How Likely Are You To Have A Bike Accident?

Over recent years, cycling has become a more popular mode of transportation in this country.

More than 3.5 million bicycles were sold in the UK in 2007, a significant increase on the 2.8 million sold in the year 2000. As a result, the cycle lane network in the UK is constantly expanding to meet the demand and now covers more than 12,000 miles.

According to the Royal Society for the Prevention of Accidents (RoSPA), 16,000 cyclists are killed or injured in reported bike accidents on UK roads every year.

These statistics show only those bike accidents that were reported. Many other less serious accidents, especially those involving children, are not reported. RoSPA estimates that between 60% of all bike accidents go unreported, especially when it is a bicycle-only accident with no third-party involvement.

According To The Statistics

Around a quarter of the cyclists killed or injured in bikes accident are children. The number of bike accidents in each year group increases as children grow older,Â usually peaking at around 16 years. This reflects increased cycling when children attend secondary school and may also indicate riskier behaviour in this age group.

While cycling can be dangerous if the necessary safety guidelines and the law are not followed, there are more casualties and fatalities on the roads caused by other modes of transportation. The table below shows the types of transport, along with the number of fatalities and serious injuries caused by accidents on UK roads in 2006. 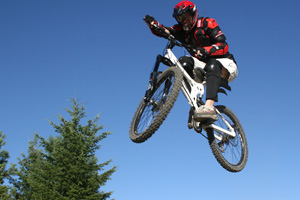 Cyclists who have been injured while riding on the road can make a claim for bike accident compensation against the person who was at fault. Even if they were partly at fault, it may be possible to make a claim, although the amount of the award may be reduced accordingly.

The specialist lawyers at Macks Solicitors are happy to give expert legal advice on all aspects of claiming bike accident compensation.

Speaking to one of Macks expert personal injury lawyers couldn’t be easier. Simply call freephoneÂ 0800 980 9385 or complete the simple online claim form. Either way, you will be put in touch with a solicitor who will be happy to discuss your bike accident with you and give you advice in clear and simple terms and without any obligation.