James Pritchard, a cycle claims specialist at Macks Solicitors, takes issue with the mountain biking fashion police he came into conflict with when he decided to build his own machineâ¦

I reckon trying to avoid becoming a mountain biking fashion victim saved me a couple of hundred pounds â at the start, at least.

I decided to build a new bike from scratch because the frame on my old one was too small for me. Or maybe I got too big for the bike, Iâm not too sure.

I love tinkering and get tremendous satisfaction from building my own bikes. I found a small company in Sheffield, Cotic, who were making their own frames specifically designed for British conditions. The âBFeâ in particular caught my eye â itâs made from Reynolds steel tubing and is exceptionally tough â perfect for the, shall we say, âbiggerâ man.

I wanted a full suspension bike. Cotic do make one, the Rocket, but building a decent spec machine would set me back two or three thousand pounds and my wife wouldnât let me spend anything like that, so I opted for the hardtail BFe instead. Iâve been riding mountain bikes since I was about 12. It was all hardtail bikes then and you were posh if you had any suspension at all.

For many years wheels were all 26 inches diameter. It feels like they had been that way since Penny Farthing days. But a few years ago the trend for 29-inch wheels started catching on. Then a few months after that came 27.5 inches for the really trendy.

The bigger wheels are supposed to be better at rolling over bumps and maintaining speed, but Iâm not convinced it makes a huge amount of difference at my skill level â and my 26-inch wheels are stronger, lighter and I feel just more fun to throw around.

I admit that at the time of building this bike I hadnât ridden a larger wheeled bike, but to me it feels like itâs just a fad. Just because the fashion has changed youâre expected to make a whole new investment into something I donât see the benefit of or need for.

The trouble is that 26-inch wheels are becoming obsolete. That can have its advantages. 26-inch wheels, tyres, tubes and forks can all be had for bargain basement prices. The forks I bought were Â£900 originally but I got them for less than half that price simply because they would only fit a 26-inch wheel.

Wheel size is a bit of a controversial topic and having 26-inch wheels can bring derision from the mountain bike fashion police.

I recently discovered my back tyre was falling apart and the sidewalls were down to the threads. I ordered some new tyres online, but cancelled when I realised there was a six-week wait. I go out on it every weekend and couldnât wait that long.

I nipped into the bike shop at lunchtime and couldnât believe the guyâs condescending attitude when I told him I had a 26-inch bike.

âI donât have any of those,â he said, turning his nose up and sniffing dismissively. âBut I could sell you a bike with bigger wheels!â

I wonât be going back to that shop. We donât all have the sort of cash a new bike costs lying around. Once you go for the bigger wheels mean youâve got to totally redesign the whole bike â the frame, suspension forks, everything.

Iâve got to admit, not everything went to plan. The problem is that having bought the frame, I struggled to find some parts and costs can soon mount, cutting into the money I initially saved.

Second-hand parts are cheaper â if you can track them down and know how to repair and refurbish them. But if you need something a little bit specialised, such as a rear wheel to match the front one I already had, it can trickier.

I have now finished her though, including a matte Lime green paint job with gold and black touches. It has a single ring up front in bright green and lime green pedals to match. Iâve even customised the brake hoses.

The fashion police wonât be happy and some people will no doubt say my homemade bike looks horrific â but at least itâs unique and you can certainly see me coming! 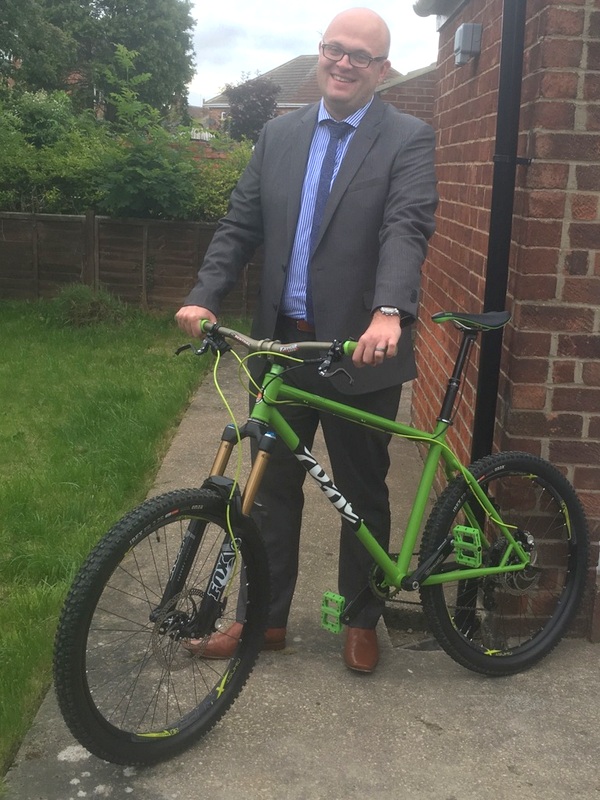